In February 2001 a post appeared on the discussion forum from a gentleman called Toru Kubo. It was treated with a degree of scepticism, because he claimed to have been the Imperial Master. However, the photographs which he subsequently supplied and which are even now loading onto the page below this point proved that this was indeed the man in the Imperial Master suit.

This generated quite the buzz on the forum, but there was a problem. Toru is, funnily enough, Japanese. English is not his first language. I was therefore concerned about his ability to respond to people's queries. Fortunately I had an ace up my sleeve - a friend of mine from university called Eleanor. Eleanor now lives in Japan - translating Japanese stuff into English stuff. Are you there yet?

With many thanks to Toru and Eleanor, reproduced below are the translations of what Toru has to say, and his pictures. Needless to say, this represents a curious sort of full circle of events and perhaps even stranger coincidence in that I happened to know someone who could translate Japanese. Funny old world eh?!

Hello. I'm Kubo. 20 years ago I used to operate the puppets on a TV show called X-Bomber. Now I'm an art teacher at a junior high school.

I found Andy's site through a search on Yahoo. There are hardly any sites about X-Bomber in Japan. I knew it had been shown abroad, but I hadn't realised that there were such detailed sites as his, so I was very surprised. (It was as if I'd encoutered a friend abroad, whom I hadn't previously been able to meet.) I was so happy, I gave in to temptation and wrote a message on the notice board [can't remember the internet term here], even though I can't speak English. A lot of replies and mails appeared on the message board after that, so I was deeply moved. However, it is difficult for me to exchange opinions with people via e-mail or the notice board in English. (Actually, I still haven't been able to understand the whole of the content of Andy's site sufficiently.)

I'll write more later about my memories and about things that happened when we were filming.

Thank you for your help.

I live in Chichibu City, in Saitama Prefecture. This year we've had 60cm of snow here.

I always check the forum on Andy's site. I'd like to write something there, but I don't entirely understand what everyone's written, so I'm a bit hesitant to do so.

Anyway, here's the explanation of the photos I sent Andy.

The top photo shows the film crew of X-Bomber. The filming took place in a big warehouse in the suburbs of Tokyo. Everyone gathered for this photo, which was taken after the last filming of X-Bomber, to commemorate it. (I think you can see Lamia, who appeared in white clothes in the last programme, in the centre of the photo.) For filming, we were divided up into the "Special Shooting" [some kind of filming-related idea] team, the team operating the puppets, the team making the puppets and props, the camera team and the lighting team, but that photo is unusual because it shows all of us together.

The third person from the right in the front row, holding a PPA, is me, and the person next to me, wearing a light blue puffa jacket is Mr Hayashi, who was the team leader of the puppet operators. The man behind us, with a brown leather jacket, sunglasses and a beard/mustache is the director, Mr Mikami.

The second photo shows me with Kirara. It's the bit where Kirara boards SKULL and is involved in the last fight. The round, white thing on Kirara's chest is gunpowder. (Later, Kirara gets shot and dies.) The helmet and goggles were to protect my face. The special shooting team used quite a lot of gunpowder, so there were times when we were worried that the warehouse we filmed in might catch fire. (Someone/some people [no plurals in Japanese, so I can't tell] actually did get burned.)

The fourth photo shows me taking a break during filming. The Imperial Master's mask covered my whole face, so it was really difficult to breathe. (During filming I inhaled some smoke, which was really painful)

I only have these 4 photos in my apartment right now, but I think there are several more taken around the same time, which are in my parents' house. If I can find them, I'll send them to you. Also, if anything interesting comes up on Yahoo Japan's auction site, I'll pick it up, so please look forward to that.

The end of year exams [Japan's academic year is April to March] are coming up at my junior high school, so I'm going to be a bit busy and it might be a bit of a while before I can write again.

All the best.
Toru Kubo

As described by him above. 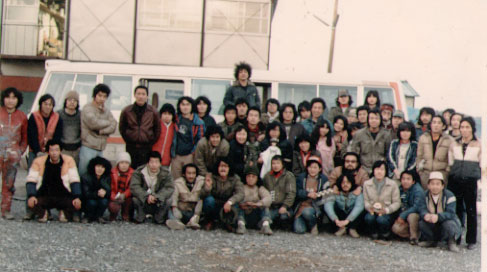 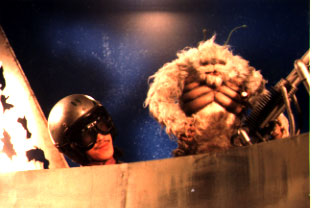 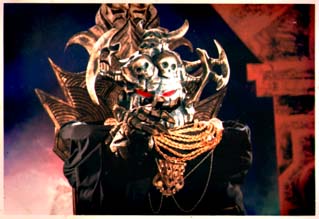 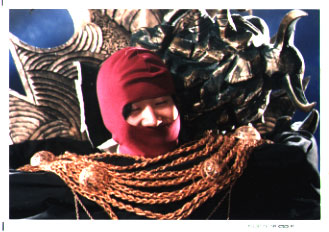 The cherry blossom here is blooming beautifully. I've got a bit of time to spare, so I thought I'd drop you a line.

When you've got some time, could you send the following message and photos to Andy please?

There are quite a few photos, but I'll try to explain them simply. Among these photos, there is only one from my private photo collection in which aliens (the alien?) can be seen. The other photographs are copies of photos that appeared in magazines when the programme was broadcast.

The drawings on the yellow background were drawn by Goh Nagai himself, and depict the characters from the show. The original X-Bomber manga, which appeared in a manga magazine called Gekkan Shonen Jump, was drawn by a different manga artist. The puppet versions of the characters have nicer expressions, don't you think?

The other photographs were taken during filming. We used several versions of the spaceship, all different sizes. If you look at the black and white photos, you'll be able to get the general idea of their size, I think.

The building in one of the photographs is the warehouse we used for filming (the sign says "Cosmo Productions").

If there's anything you don't understand, just ask.

Photos as per third message. 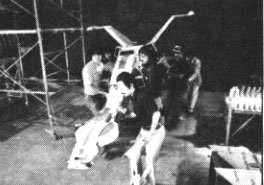 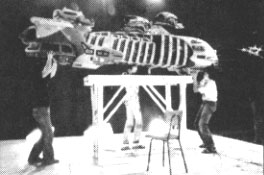 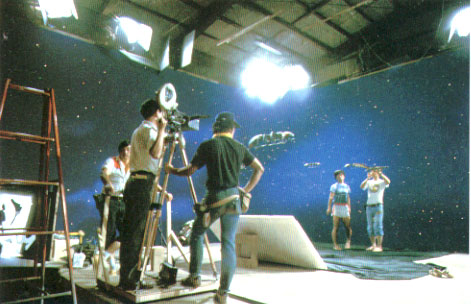 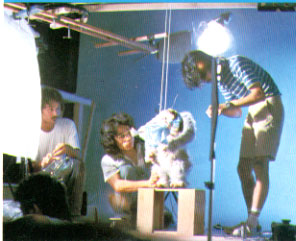 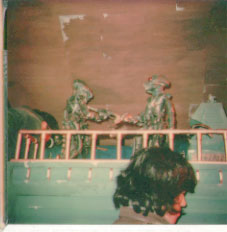 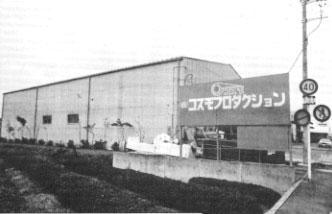