The Manga Max article was a thing of beauty before you even got inside the magazine - or it would have been, had this alternative front cover for Manga Max 17 been used; the first page of the article sets the tone. Both of those images are from Phil Hession's (the layout artist) homepage. The actual cover of MM 17 has the same wording, but the emphasis is on the Yoshiaki Kawajiri text with the illustration for that story taking the place of the imposing Dai-X illustration. Phil's work is original - please do not copy it without his permission. Click here to view the cover which was actually used.

3 September 2001 - here's the good stuff! Steve Kyte, the illustrator of the Manga Max article, has started to provide me with the original and production artwork he created and collated during his work on the article. The images below will be added to as Steve re-creates some of them, and some were not used in the magazine for space reasons. Please take note of the copyright notices on the images - they are very impressive pieces of work and should not be reproduced without Steve's position - the intro page to the article has his contact details. 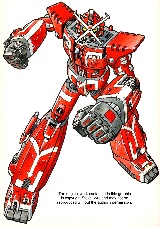 This is a big, BIG image of the Big Red One - Dai-X. You'll have seen a slightly mangled version on a couple of pages here, but this is the out and out original!

Aside from the superb detail on this side view of the X-Bomber, note that Go Nagai's original design had X-Bomber firing a sort of "X Torpedo" from its neck, rather than the familiar laser blast. 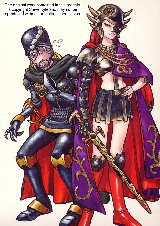 These two (Captain Orion, left and Commander Makara, right, in case you don't know!) are all Steve's own work. Anyone else think Makara could walk right into an episode of Xena: Warrior Princess?! 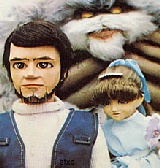 An unusual, not-in-the-series photo of Lamia's adopted family - Professor Hagen, the young Lamia and Kirara in the background. 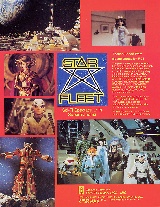 A USA flyer for the series from Enoki - what's interesting (images aside) is that it's plugging the compilation tapes which were released here in Britain. This is odd, because the US saw the whole series released over 8 tapes. So this may be a poster Enoki sent to European distributors... 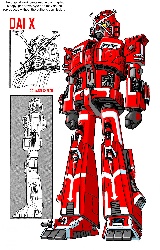 Another impressive Dai-X image, complete with a Go Nagai sketch of the robot's head. 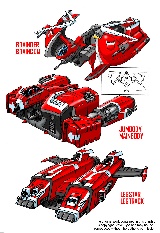 The three component fighters that combine to make the Dai-X - with both versions of their names atttached.