The Skull is not the sort of spaceship you generally see in Western science fiction, but in Japanese anime sea-going battleships transformed into space cruisers named Yamato are par for the course! What's interesting from a Western point of view is that the Skull looks very much like a pirate galleon, and yet the reality of its mission has no connection to piracy at all. This wouldn't come as a surprise to Japanese viewers, of course, because these sorts of ships are generally heroic in nature in Japanese series.

So, what do we know about the Skull as a ship? Not a great deal. It's captained by Captain Halley and crewed by officers loyal to him. It was the ship that evacuated Lamia and the elders from the planet Esper when it fell under Alliance attack, although it's not clear whether Halley was its Captain at that point. It was also responsible for rescuing Professor Hagen and bringing him to Callinian when his own ship failed. Somewhere in between it was also, presumably, responsible for sending Lamia to Mars as a baby.

The Skull seems to have been monitoring the situation in the Solar System in 2999 as it makes an appearance near Pluto shortly after the Alliance's initial attacks. A throw away comment by the Imperial Master indicates his surprise at seeing the Skull during the final battle, suggesting that it has had previous encounters with the Alliance between the time of the Esper evacuation and the events in Star Fleet. 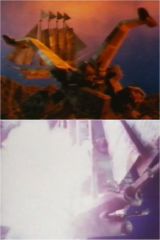 Although Halley is often reluctant to directly engage the Alliance because of his association with the Callinian people, who are pacificists, the Skull is nevertheless capable of handling itself in combat. It's smaller than X-Bomber overall, although its sails make it quite a tall ship. Its armour allowed it to survive an assault from Makara's cruiser, although it was heavily damaged.

The Skull lacks the really heavy firepower of X-Bomber but is very manoeuvrable. It has a number of pulse laser turrets in its sides, in effect cannon ports as you'd expect on a galleon. It also has a twin barrel deck mounted laser cannon, which is manned by Captain Halley and Kirara at various points during the series. These weapons are capable of holding off Alliance fighters with their combined firepower.

Although only used once in the series, the Skull does have weapons capable of damaging Makara's cruiser. These are forward firing beam cannons which aren't used against fighters. The same emitters are used to fire a ray at X-Bomber when trying to free it from the electric solar energy net.

The Skull is also equipped with tractor beams, which it used to pull the X-Bomber free of the Black Hole, and a grappling magnet. So although its design is very unusual, it's a very capable starship. Although badly damaged in the final battle with the Imperial Master, it wasn't actually destroyed but instead seems to have been absorbed during the birth of F-01 as Halley and Lamia stood on its deck and became one being. A unique end for a unique vessel.