Ulysses, Ulysses! Soaring through all the galaxies!

This was, as I remember it, your classic early morning Channel 4 cartoon. Although apparently it may well have been your classic mid afternoon BBC 1 cartoon as well! I'd assumed it was a French production, but I've been told (with thanks to Sebastien Colmant) that it was in fact a Japanese show which was produced specifically for French speaking markets such as France, Belgium and Canada. Ulysses 31 revisited many of the Greek myths (quite accurately) as a technologically advanced Ulysses searched for the Kingdom of Hades to find his way back to Earth. Ulysses has recently (early 2004) resurfaced in a late evening slot on Fox Kids - whether this will result in an English speaking release is uncertain; the show is out in its original French on DVD. May 2004 - well, the uncertainty is gone now that it's out!

This is the hero, Ulysses, who annoyed the King of the Gods, Zeus (by destorying the Cyclops), and was consequently sentenced to wander space to try and find a way back to Earth. Just to make life tougher, Zeus freezes almost all the crew of the Odyssey. 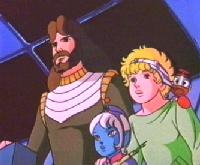 This is the active crew that remains to manage the Odyssey. This consists of the hero, his son, an alien girl they rescued and the requisite annoying character (RAC), a little red robot. If you think about it for a moment, virtually every kids series has one of these RACs. Snarf, Orco, that unicorn out of Dungeons and Dragons...

Here are some slightly larger shots of the supporting cast, complete with names. 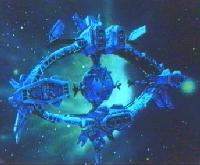 The French are very into their anime, and it shows in the designs for Ulysses 31. This is the Odyssey, Ulysses' mothership. You may remember the big iris which opened wider according to how much power the ship needed. A nice piece of kit complete with energy shields and a reasonably bright computer! 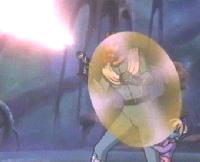 This is a nice action shot of something which really impressed me at the time. Ulysses is a very well equipped bloke. He has a forcefield projector on his left wrist and has a combined laser pistol/sword which he uses in his right hand as here, plus he has a jet pack! What more could you want, eh?!

My thanks to Sean Eaton for allowing me to purloin images from his site for this page as the DVD wasn't out at the time. Old videos of the series and the like are available through Ebay. I also happen to know that (apparently very good) French toys of the show exist.

For, ah, "technical reasons" (!) in order to watch the clip you'll need to right click on the link, select "save target as" and rename the file so that it ends in .wmv rather than .sfxb. The video format is Windows Media Video which modern versions of Windows Mediaplayer will play.

Feel free to discuss the show on the forum.